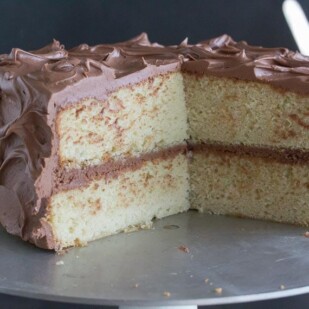 This is the basic low FODMAP Yellow Cake recipe you have been looking for! Perfect for birthday cakes or anytime you need a basic recipe - to make into rounds, a rectangular snack cake or even cupcakes!

Low FODMAP Serving Size Info: either two 8-inch or 9-inch (20 cm or 23 cm) cake layers; a 13 by 9-inch (33 cm by 23 cm) pan; or 24 cupcakes. Serving size depends on which frosting or buttercream you use. As a starting point we recommend cutting round cakes into 14 servings, the rectangular cake into 24 servings and eating only 1 cupcake at a time.

If You Can Tolerate