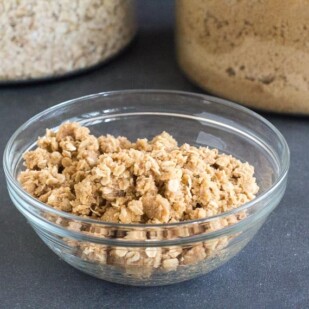 We love fruit crisps and this Vegan Low FODMAP Crisp Topping is versatile enough for your favorite fruit filling. You can see it showcased in our Low FODMAP Strawberry Peach Coconut Crisp. We have combined brown sugar, oats, low FODMAP flour, cinnamon, salt and melted coconut oil for a super simple topping. Make a double batch and freeze half to use later!

If You Can Tolerate: