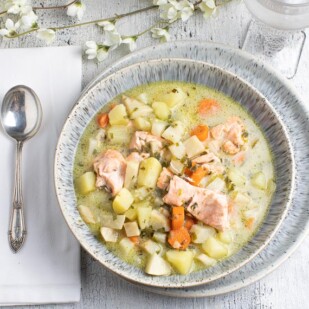 Our Low FODMAP Salmon Chowder combines heart-healthy salmon with low FODMAP amounts of celery, leek and scallion greens, carrots, stock, coconut milk, bay leaf and thyme. And, this hearty. Comforting chowder can be on the table in about 30 minutes.

There are a few things to note. First of all, the FODMAP content obviously varies greatly depending on type of processing. Also, although “lite” or “light” canned coconut milk has not been tested, it is the same as canned but with a higher water content, so you can use the canned coconut milk amounts designated and know that you are within low FODMAP serving sizes.