Why Measure By Volume?

This is because the end user was the American consumer and Americans use volume measurements. Many, if not most, U.S. households do not own a scale.

IBS Is A Global Issue

1 in 5 people worldwide have IBS and statistically up to 75% of them could be symptom free if they followed the low FODMAP diet. We want to help as many of you as possible.

This is why EVERY low FODMAP recipe that I develop, whether it is in my book, here at FODMAP Everyday®, or elsewhere, such as the recipes I develop for Fody Foods, will ALWAYS have both volume and metric measurements even though The FODMAP Everyday® Test Kitchen is in Massachusetts in the U.S.

We know you have enough on your plate, so to speak, with your IBS. We want to make cooking as enjoyable as possible. Part of that is getting the best results from your efforts.

And as we all know, the low FODMAP diet is completely dependent on serving sizes and recommended amounts.

Let’s Learn How To Measure By Volume

This article is focusing on measuring by volume, both for dry ingredients as well as for liquids.

The first aspect to consider is your equipment.

Not All Equipment Is Created Equal

Not all measuring equipment is created equally. In fact, some of it is literally “wrong” and will provide incorrect measurements. Let me explain.

Years ago an article in Gourmet magazine forever changed the way I looked at volume measuring. The wonderful Editor-in-Chief Ruth Reichl asked all of her staff to bring in their measuring spoons from home into the office.

As you can imagine, there was quite an assortment of new, old, inexpensive, pricey, metal, plastic and so on.

Their test kitchen filled the various individual tablespoons with salt and weighed the results.

How Much Does Salt Weigh?

First of all, we do know how much salt weighs. There are tables of national weights and measures that tell us the weight of foodstuffs.

The results from the Gourmet study were shocking. The gathered “tablespoons” produced weights of salt that ranged from 7 g to 19 g.

Take in that statement. What this means is that folks at home, like you, or the Gourmet magazine editorial team in their homes, were, or are, using sets of measuring spoons that might be incorrect. We all RELY on the fact that our implements are indeed measuring out actual “tablespoons”, when in fact they might be very wrong and inaccurate.

Why Is This Important? Taste, Texture & FODMAPs

Let’s say you have been happily cooking and baking for years at home and making your Mom’s banana bread and your favorite pot roast and everything has been coming out fine. But perhaps those recipes were created and adjusted to “your” tablespoons and not accurate, calibrated tablespoons?

Then, when you make a recipe that has been properly developed with calibrated tablespoons, but you make it in your kitchen with your tablespoons (which measure differently) and the recipe comes out poorly, your first thought is probably, “oh this recipe doesn’t work”, or, “this isn’t a good recipe”, when in actuality, it was your equipment that was at fault.

More problematic is with the proliferation of recipes on-line created by people who are not professional recipe developers, who are telling us to use a tablespoon of this or a tablespoon of that and we don’t know if their original equipment was precise. This is a huge reason why so many recipes are unreliable.

So far the above has addressed whether a recipe “works” or not, due to accurate or inaccurate measuring. And certainly part of the reason we cook and bake is to have food that tastes fabulous and has great texture – both results of proper measurement.

We Want To Know About FODMAPs!

But now we have to consider FODMAPs as well. And when it comes to the low FODMAP diet, measurements count!

If you learn that you can have 1 or 2 tablespoons of something, you don’t want to be cheated out of any amount that is considered low FODMAP.

Now we have to pause and talk about Australian tablespoons.

Australian Tablespoons vs. The World

If you haven’t read our article When Is A Tablespoon Not A Tablespoon? I invite you to do so.

Simply put, teaspoons are 5 ml. in size around the world

Australian tablespoons are comprised of FOUR teaspoons, which means their tablespoons equal 20 ml.

EVERYWHERE else in the world a tablespoons contains THREE teaspoons and equals 15 ml.

This is significant. The low FODMAP diet was developed in Australia. When Monash represents their findings in tablespoons on their App, if you live ANYWHERE outside of Australia, then what you think you are looking at is not what you think it is.

Looked at another way, if a recipe is from an Australian source, and you live elsewhere in the world, assume that the tablespoon in the recipe is equivalent to 1 tablespoon plus 1 teaspoon (20 ml).

This WILL have a huge effect on your baking and cooking. Imagine if a recipe is calling for salt or baking powder and your measurement is off by a quarter?

In reference to FODMAPs, if you thought you could only have a “tablespoon” of raisins or dried cranberries and now you know that you can actually have a fourth more, isn’t that a great bit of information? It adds up!

Whether you are measuring liquid or dry ingredients you need measuring cups and spoons that are calibrated properly.

Ditch the dollar store and garage sale equipment. Toss anything that is dented. Those fancy ones that look like flowers or hearts are probably more decorative than precise.

We use dry measuring cups from Cuisipro (shown in main image up top), and King Arthur and we like Pyrex for liquid measuring cups.

For measuring spoons we use sets from Cuisipro, seen below. 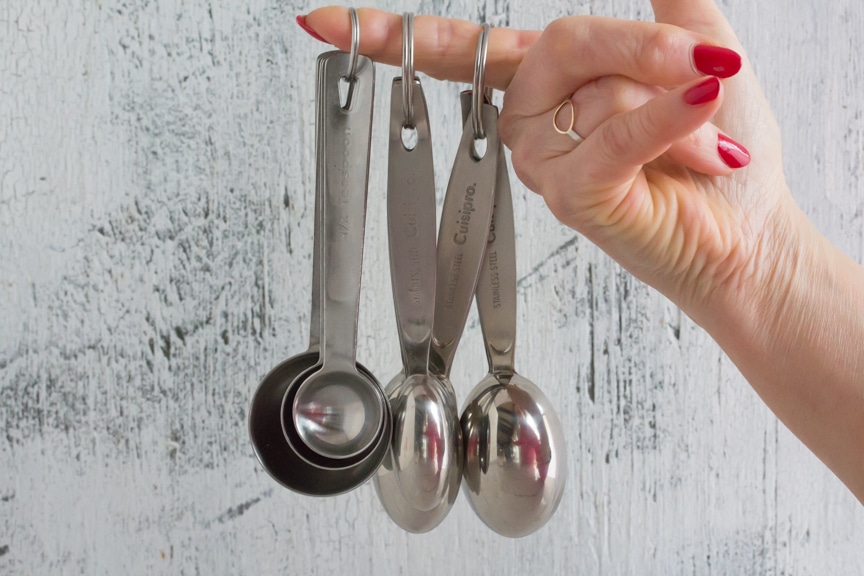 These sets are not cheap, but they can last a lifetime AND help you cook and bake better AND help you create more precise low FODMAP servings.

How We Measure Dry Ingredients

It is important to know how our recipes are created. We use the dip and sweep method for dry ingredients, except for brown sugar (see below).

For loose dry ingredients such as flour, sugar, rice or oats, begin by giving the food a quick whisking to aerate it, as they often compress upon storage.

Use the correct size dry measuring cup that you need (use a ½ cup measuring cup if you are aiming for ½ cup flour) and dip it into the container of flour so that the cup is overflowing. Use a straight edge implement to scrape off the excess so that your measured amount is now level with the top of the cup, allowing any overflow to fall back into the container. 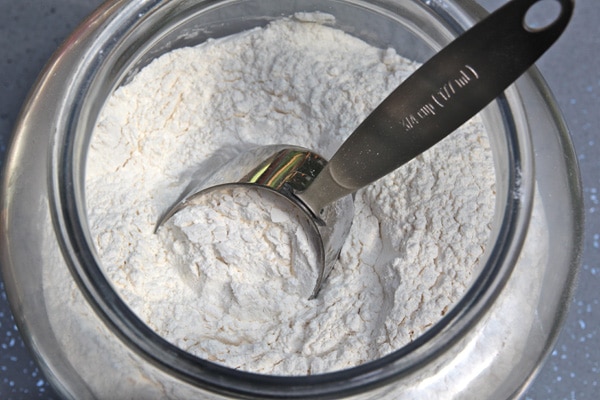 If you need an odd amount, such as 1-½ cups, perform the task in as few measurements as possible to reduce variance. In this instance I would use a 1-cup measuring cup, then a ½ cup.

Note in the top image that we have cups that measure ¾ cups and 1 ½ cups. If you want to splurge, I highly recommend you buy these sets as well.

There are also odd-sized measuring spoon sets available that we love.

Measuring spoons are to be used similarly.

For brown sugar, we firmly pack brown sugar into the size cup that is called for.

How We Measure Wet Ingredients

Similar tests have been done, primarily by Cook’s Illustrated, on the exactitude of liquid measuring cups. Pyrex cups – only their traditional models – have high reliability and we recommend them.

Place your liquid measuring cup on a flat surface. Pour your liquid in slowly (you don’t want to over-measure and have to pour any out) until the liquid is level with the line that represents your desired amount.

Bring your eyes level with the measurement line that you need. There will be a slight concave curve in the surface of the liquid, which is created by surface tension. Make sure that the bottom of this arc, called the meniscus, touches the desired measurement line.

For amounts less than ¼ cup, use tablespoons to measure or use small shot glasses meant for the job, as seen below. 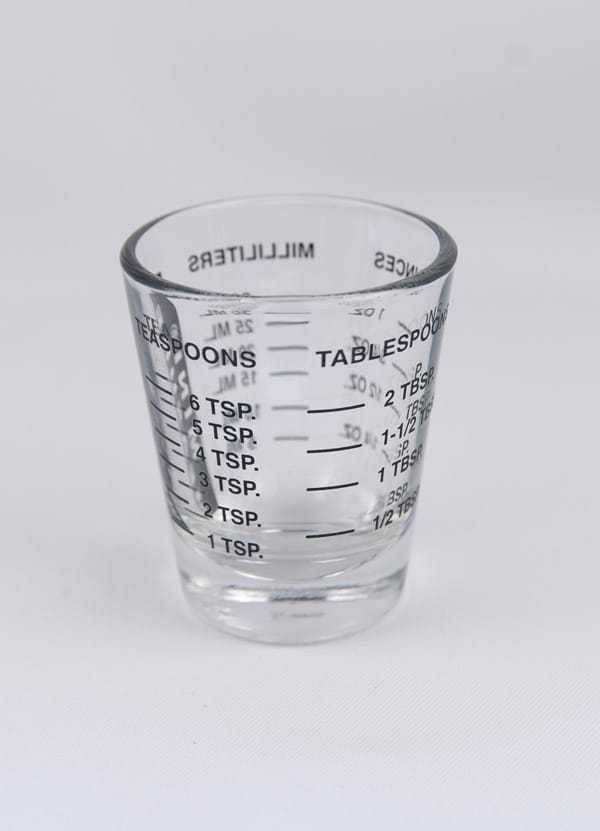 Do not use dry measuring cups to measure liquids, or vice versa. 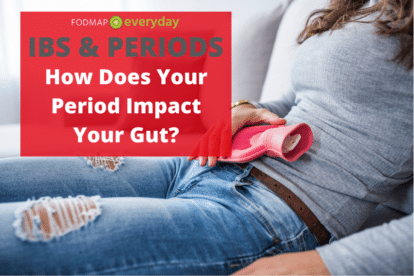 IBS & Periods – How Does Your Period Impact Your Gut? 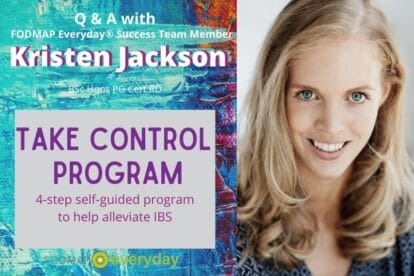 Take Control of Your IBS with Kirsten Jackson! 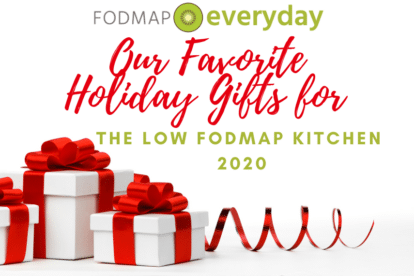 Our Favorite Holiday Gifts for the Low FODMAP Kitchen for 2020 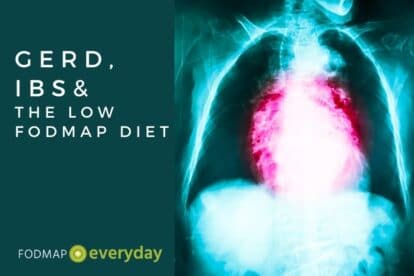