An estimated 10 to 15 percent of the worldwide population suffers from irritable bowel syndrome (IBS), a chronic digestive disorder of the large intestine that causes abdominal pain, diarrhea, constipation, or alternating episodes of both.

These symptoms are the result of abnormal intestinal motility –– too fast leads to diarrhea, too slow to constipation –– and increased sensitivity to pain. Bloating, gassiness, bowel urgency, and mucus in the stool are also common in IBS.

Despite its prevalence, the exact cause of IBS is still unknown, and we don’t have diagnostic tests for it like we do for celiac disease and inflammatory bowel disease (IBD). Still, there has never been more interest in understanding and treating this complex disorder.

The most promising area of IBS research concerns the “gut-brain axis,” which is a shorthand term for the way the brain and gastrointestinal tract communicate. If you’ve ever had “butterflies in your stomach” or an urgent need for the bathroom before an exciting or upsetting event you’ve experienced the gut-brain axis in action. 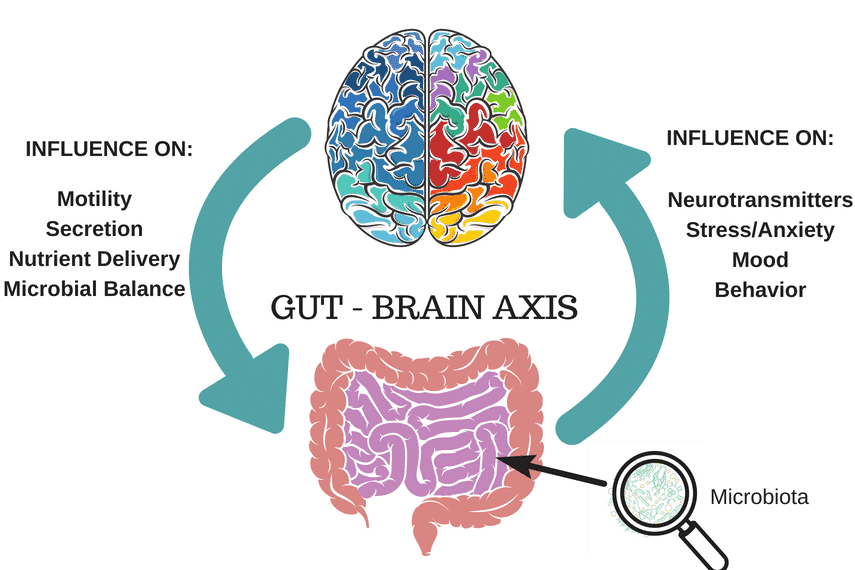 The important thing to understand is that gut-brain axis is a two-way street, with the brain influencing how the gut functions and the gut modulating how the brain functions.

Researchers suspect that disruptions in this pathway cause the intestinal motility problems and increased sensitivity that lead to classic IBS symptoms of diarrhea, constipation, and pain. Furthermore, they suggest that gut bacteria –– the gut microbiome –– play a big part in causing brain and gastrointestinal tract to miscommunicate in the first place.

How Is IBS Diagnosed?

There is no test for IBS; it is diagnosed through exclusion and is largely based on symptoms. You should not try to self-diagnose (or use home test kits) as many medical issues can present with similar symptoms. A gastroenterologist or MD should first review your full medical history and perform a physical exam, then will most likely order blood, urine and/or stool tests and screen you for celiac disease. Depending on your symptoms, they might also screen you for IBD, Crohn’s, diverticulitis and/or endometriosis.

A colonoscopy might be recommended, and some doctors will order X-rays or CT scans, lactose-intolerance tests and/or breath tests for SIBO.

A formal IBS diagnosis will be given when other issues are ruled out and your symptoms match those that are indicative of IBS.

How Is IBS Treated?

It’s very frustrating to hear that the cause, much less the cure, for such a common condition is still unknown, but we do have more ways of treating IBS than ever before. These interventions generally fall into three categories: dietary, pharmaceutical, and psychological.