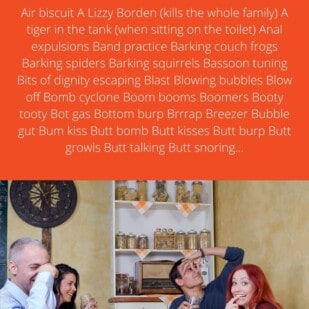 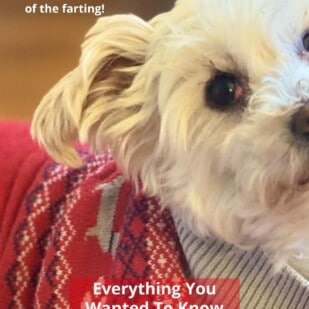 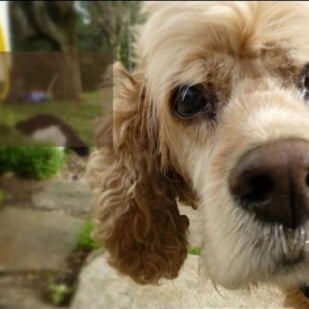 Whether you call it wind or flatulence, we all fart. And when you think about that, it is curious how alternately, or sometimes simultaneously, it can be hilarious and/or horrifying.

So much so that it is hard for us to say the word. Fart. Wind…sure they make their way into our conversations, but we became aware that the concept of farting was a popular one for putting one’s own spin on the nomenclature.

Since we focus on digestion here at FODMAP Everyday®, farting was an obvious topic. Make sure you read our accompanying article, Everything You Want to Know About Farting, But Were Too Afraid to Ask.

WARNING: If you are easily offended, this article might not be for you. We do not intend to offend anyone – rather, the intent is to normalize the action of farting. We All fart.

Farting Is Serious Business – And Humorous, Too

For this article we reached out to our community – and family members who couldn’t resist adding their 2-cents – and compiled a list of words that folks use for farts or the act of farting.

As a bonus, we have some phrases and mini stories about farting we know you will enjoy.

Ditty provided by U.S. based fan:

“My mother does not acknowledge they exist”

“I grew up really believing that girls didn’t fart. This is what we were taught – and I believe it. The first time I heard a girl fart, I didn’t know what was going on”.

“Growing up we never farted. It just wasn’t done”

“Having been an experienced fart lighter…you can determine the chemical contents of your fart by the color of the flame and the odor of the burnt fart. Clearly there is a good reason I became a Pediatric Neurologist rather than a Pediatric Gastroenterologist”

“I just call out my brother’s name”

“A warning shot.” Uh oh, what do you call it when you mean business? “After my body issues a warning shot, I know I have to aim for the head”.

After we received so many entries for the fart description part of our article, we decided to ask about smell vs. sound. This came up because we realized that smelly farts were often derided, while loud ones could be treated humorously. Why was this, we wondered?

Let’s lead off with a conversation between deaf children and their teacher.

“I was gonna say one of my favorite things ever in life was when I saw a deaf person rip a huge juicy fart in an aisle at Walmart, and then move on like nothing happened while the few people who heard and saw it cringed in horror, and then a few people walked into the cloud and choked. The dealer was casually looking at stuff on an endcap four aisles down, completely oblivious. Srsly. Best day out shopping ever.”

“I completely agree, the noisy ones, the silly sounding ones, the noisy at the worst moment ones, those are considered funny by bystanders if not the culprit. If it is smelly, derision, shaming, etc. takes place AS IF no one else but the culprit has ever had a stinky fart… 🙄 The most interesting ones, however, the loud funny ones that attack with stink at the end! In those cases, it begins with laughter and ends with a shocked, ‘ewe, oh my god, what crawled up your butt?’ And other such comments!”

“Auditory I find to be most humorous. I even have a fart app on my phone. Makes me laugh.”

“After 42 years of marriage we still say, ‘Did you?’ The dogs are good scapegoats.”

“I think they’re all funny. I feel like as an adult, I have to ignore them sometimes, but it’s literally the hardest thing I’ve done that day when it happens.”

“Audible brings much more joy. Last year for a 7-year-old old birthday I got her a fart noise machine (small and hand-held with 9 different sounds) and then we all played Twister as a family …Well it went on for hours of uproarious laughter. Everyone had a great time pushing certain buttons at opportune moments in the Twister game 🙂”

(PS: We found a wide variety of fart machines, from inexpensive, to fancy ones with remote control).

“When someone burps…and they excuse themselves, we sometime hear someone else say ‘better up than down’, meaning in the hierarchy of body functions/noises, audible burps rank higher than farts…likely as they do not linger….lol.”

“It’s the difference between directness and passive aggression!”

“I’ve thought about hiding a fart machine when people walk too close without a mask.”

“There is also the driver in the car who has control of the windows.”

“Once I was in the produce section of a grocery store. I really had to fart and I thought it would be silent. It wasn’t. Nearby, was a woman pushing a cart with a baby in it. She remained stoic and ignored the situation. Her baby was laughing hysterically. So much for discretion.”

“And when you do it in court while on television the people next to you now have the right to exclaim, ‘How Rudy of you!'”

“I think it’s very rude to pass gas while eating with others, so I have instituted a rule against it in my household. I feel like if you’re potty trained you can usually—not always— refrain from passing gas until you’re in a private spot. If you pause and lift one cheek off the chair, then you’re aware and in control, and you had better be excusing yourself from the table before you pollute my meal!”

“There’s a Kurt Vonnegut novel where, at the end, humans have evolved into kind of seal-like creatures, but he states that one of the things that still makes them human is that they still giggle when someone farts.”

For good measure, here is the quote: “And people still laugh about as much as they ever did, despite their shrunken brains. If a bunch of them are lying around on a beach, and one of them farts, everybody else laughs and laughs, just as people would have done a million years ago.”

Vonnegut also gave us this quote from his book, A Man Without A Country, which might be the most profound use of the word and concept: “I tell you, we are here on Earth to fart around, and don’t let anybody tell you different.”

And We Will Leave You With Flatuscents

We leave you with a young Jim Carey in a video promoting Flatuscents.

Do you have a favorite term for “passing gas” that we haven’t yet listed? We’d love to hear about it below in comments!

For All of our Low FODMAP Hanukkah Recipes  Click Here 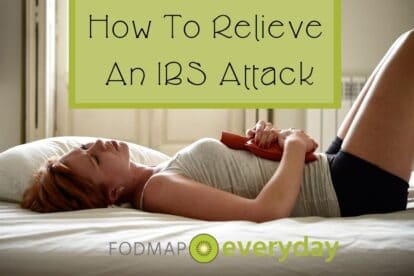 How To Relieve An IBS Attack 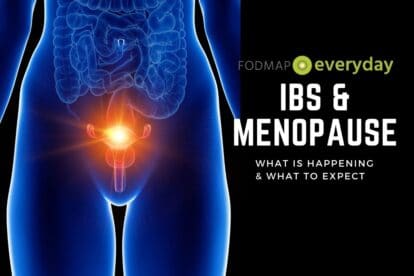 Menopause and IBS: What’s Happening & What to Expect 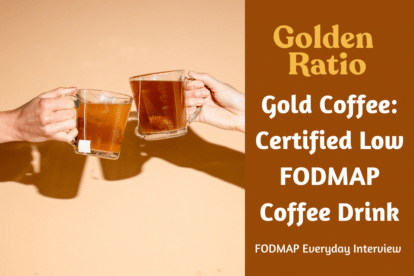