In this installment of my FODMAP and Food Processing series, I will be focusing on how and why fermentation changes the FODMAP profile of dairy foods and sourdough bread. You can also check out Part 2 of this deep-dive into fermentation, in which soy foods and cabbage are discussed, as well as the first article in this series on the effect dehydration, ripening, and storage conditions have on the FODMAP content in fruit.

As I wrote in that first piece, I was reminded (and it is always surprising to note) that the same food can differ in FODMAP concentration depending on the environmental conditions it has been subjected to.

Because of this, the scientists at Monash University always test (and retest) every item they include in the Monash University Low FODMAP Diet Smartphone App. Consequently, my discussion will be limited to foods found in this essential resource. 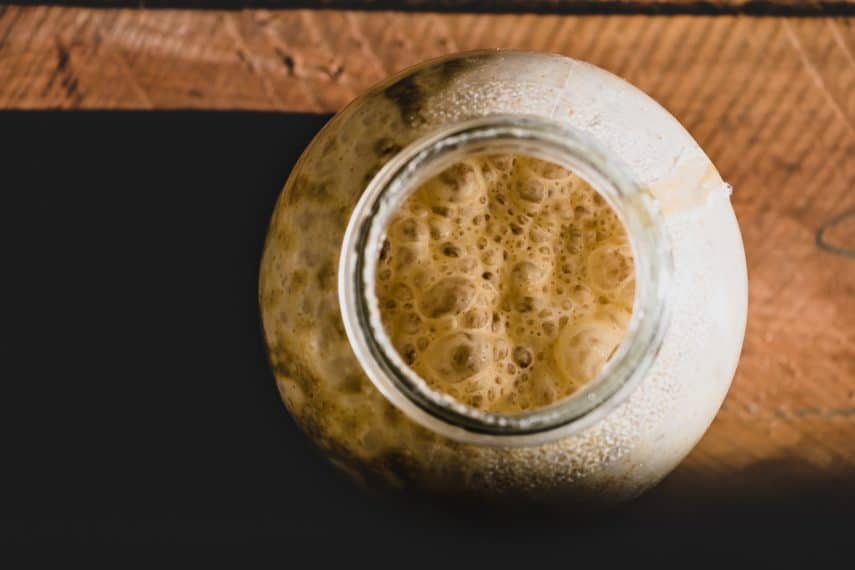 Fermentation has been used for millennia to preserve food and to enhance its nutritional benefits and flavor. In a nutshell, fermentation refers to the process of breaking down carbohydrates (remember, all FODMAPs are carbs) by exposing them to microorganisms such as bacteria, yeast and mold.

Sourdough bread, yogurt, kefir and cheese, as well as sauerkraut and soy products such as miso and tempeh, and are all examples of fermented foods.

Two words that inevitably come up when discussing fermentation are probiotics and the microbiome. Anyone with an interest in (or problem with) their digestive system is probably familiar with both.

Just so you know in advance, this article is not going to be about probiotics or the microbiome because they are not relevant to the theme of this series, which is how various food processing techniques alter the FODMAP content in food.

Future articles on FODMAP Everyday® will delve into the complex and ever-evolving world of probiotics, but for a great review of the microbiome, check out my colleague Jody Garlick’s piece, The Microbiome Explained.

In addition to changing the taste and appearance of milk, fermentation also makes it more digestible. Lactose, a disaccharide sugar (the “D” in FODMAP) found in milk, is notorious for causing bloating, gas and diarrhea in susceptible people.

These are folks who don’t produce enough lactase, the intestinal enzyme that helps break down lactose into more easily absorbed monosaccharide sugars. Lactose malabsorption may or may not cause symptoms, but when it does, it’s referred to as lactose intolerance. 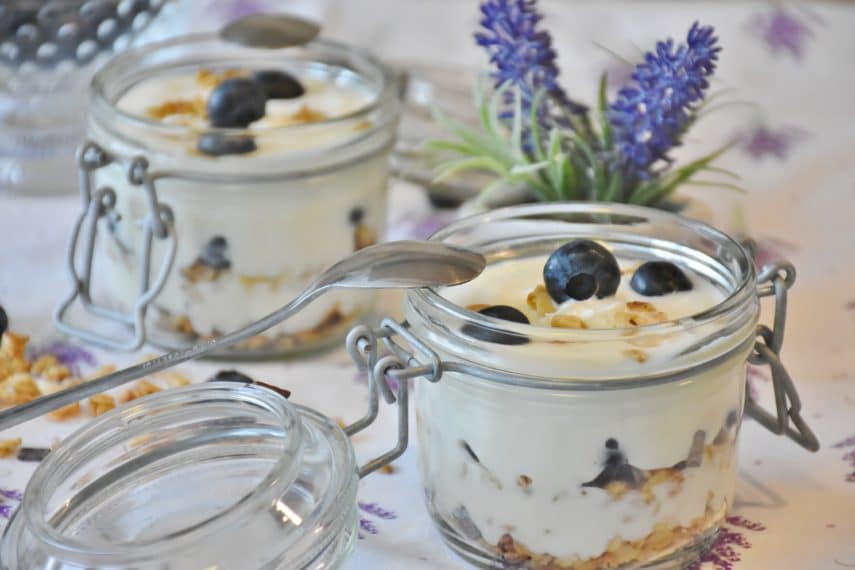 These days, lactase-treated milk products are readily available, but long before food manufacturers got in on the act, fermented dairy foods were known to be easier on the digestive system.

The longer the fermentation period, the more opportunity the bacterial culture added to milk has to consume all that lactose.

This helps explain why aged/ripened cheese is much lower in lactose than fresh varieties such as ricotta, cottage cheese and cream cheese.

Similar to fresh cheese, most commercial yogurts and kefirs also undergo relatively short fermentation periods, which is why even those that boast live active cultures may still contain a hefty amount of lactose.

(FYI: Greek yogurt tends to be lower in lactose than regular yogurt because lactose accumulates in the liquid whey fraction that’s drained off in order to make a thicker product.)

If you can’t find lactose-free yogurt in your local supermarket (or you can’t afford it) you can actually make your own with regular milk and a bacterial starter. It’s prepared in a very similar manner as regular yogurt, except you let the mixture ferment for 24 hours in order to allow the starter ample time to break down the lactose into digestible sugars.

I regularly use this method to make yogurt but have never tested the final product for lactose content. My suggestion to those who are lactose intolerant would be to start with a small batch or to use lactose-free milk and a lactose-free starter.

Making your own yogurt may not be your thing, but I bet you’ll be inspired by these FODMAP Everyday® recipes, which feature yogurt and other fermented dairy foods:

You can also read our article on DIY Lactose-Free Dairy and use lactase enzymes to create a lowered lactose dairy product.

One word of caution when it comes to all dairy foods: people who are allergic to milk must still avoid lactose-free products because there are other components in milk that can cause a potentially serious reaction.

Most packaged foods sold in the U.S. are required to list the top eight food allergens (which includes milk) if they’re used as an ingredient, so make sure to check for this if you have a milk allergy.

Sourdough Bread to the Rescue

Sourdough bread is of particular interest to FODMAPers because traditionally prepared sourdough versions made from spelt, wheat and other flours high in fructans (from the “O” FODMAP group) can be much lower in FODMAPs than regular bread made with the same flour.

And unlike many gluten-free breads that include a laundry list of ingredients, sourdough bread tastes like the real thing. Try one out in our Simple Sourdough Stuffing, a recipe so scrumptious it would be a shame to serve it only on Thanksgiving.

Instead of using baker’s yeast as leavening, traditional sourdough bread relies on a culture that contains lactobacillus bacteria and naturally occurring yeast. It is then left to rise for a much longer period of time than regular bread.

This prolonged leavening process allows the bacteria and yeast in the culture plenty of time to ferment carbohydrates, including fructans. In essence, these microbes gobble up FODMAPs before they get anywhere near your digestive tract!

Not All Sourdough Breads Are Low FODMAP

You can’t just run out and buy any old sourdough bread, however, because several of the ones listed in the Monash Smartphone App tested medium to high in FODMAPs. These items were unbranded, so I was unable to check if their rating was due to the addition of high FODMAP ingredients such as honey or high fructose corn syrup.

It was also impossible for me to determine if these breads were traditionally made, or if baker’s yeast or other ingredients were added to speed up the leavening process.

If you’re interested in testing your tolerance to sourdough bread, my advice to is to start out with a small serving of one that has been subjected to a long fermentation process and contains only flour, water and salt.

Even with those provisos, the results of two recent studies raise some questions and concerns.

In this 2016 clinical trial, traditionally prepared sourdough bread was nearly four times higher in fructans (and produced more digestive symptoms in participants) than one made with the same ingredients that utilized a specific sourdough system.

This suggests that bread subjected to a long fermentation period may still be too high in fructans for people who are sensitive to this FODMAP category.

And in this 2017 pilot study, traditionally prepared sourdough bread with a low fructan content did not significantly improve subjects’ digestive symptoms when compared to a yeast-fermented (and gluten-enriched!) bread.

Furthermore, the authors of this pilot study reported “significantly more feelings of tiredness, joint symptoms, and decreased alertness when the participants ate the sourdough bread,” but concluded that this odd result was “likely due to chance, or a slight difference between the study groups at baseline.”

Four breads were lab tested. Three breads made with white wheat flour and sourdough culture had an average reduction of fructans by 72%, with one reduced greater than 92%. The fourth bread made with yeast had a fructan reduction of about 20%, however, the fermentation time was maxed out at 6 hours for all of them.

What is the takeaway? That using sourdough culture yields a bread with lower fructans. That bread made with yeast also has lowered fructans. We do not know what the fructan reduction would be with a longer fermentation time but there is an indication that it would lessen even further. We also know from lab testing that sourdough breads that have the addition of yeast and a short 2-hour rise time can be low FODMAP. So the final conclusion, that Monash agrees with, is that you can never know for sure without lab testing.

Whether due to chance or minor discrepancies in study design, the findings from both of these trials certainly provide food for thought! As always, work with your RDN to help you determine which foods are best for your unique system

Want to learn more about this subject? Read the other articles in this series: 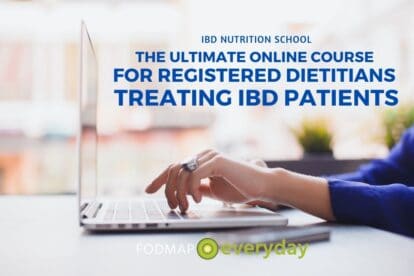 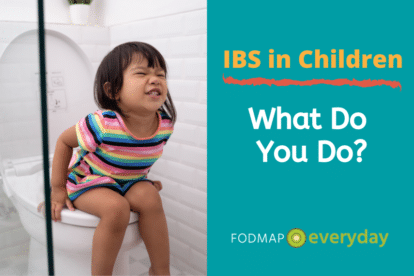