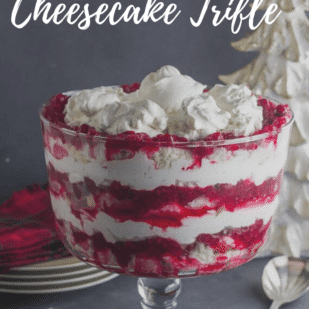 We think our Low FODMAP Cranberry Raspberry Cheesecake Trifle just might become your go-to winter holiday dessert. Trifles are fantastic desserts for large parties – they feed a crowd and can be assembled ahead. Components can even be made further ahead. Win-win ! 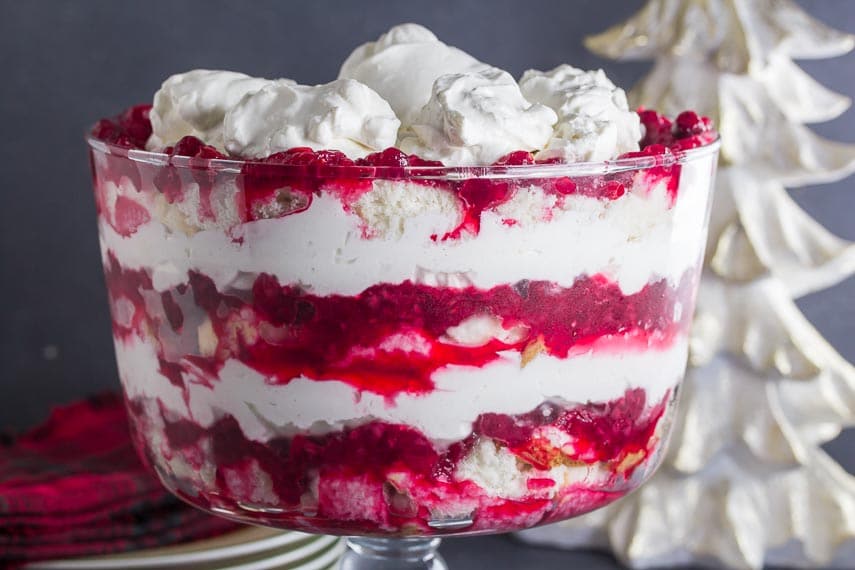 Oh, and our low FODMAP trifle looks absolutely spectacular on the buffet table.

Take Advantages Of The Do-Aheads

OK, let’s break this down. Our Low FODMAP Cranberry Raspberry Cheesecake Trifle is made up of three components: low FODMAP angel food cake, cranberry/raspberry filling, and a creamy, lactose-free cheesecake filling, too.

Our Low FODMAP Angel Food Cake can be made up to two days ahead, as can the Cranberry/Raspberry Filling. The creamy Cheesecake Filling is best made right before you are going to assemble the trifle.

Once the Low FODMAP Cranberry Raspberry Cheesecake Trifle is assembled, it can be served right away but it improves if allowed to chill for a few hours. The fillings will soak into the angel food cake and turn the three components into a whole new dessert creation. Rich, creamy, fruity, tart/sweet and luscious. 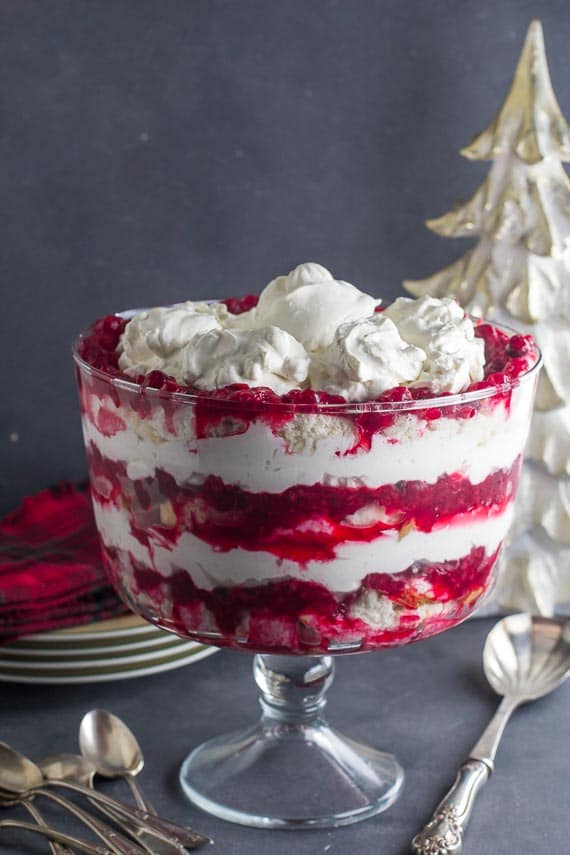 I have written about the history and definitions of trifles and trifle dishes before at our sister site, Bakepedia, as well as a how-to article. All of that information can be applied to our Low FODMAP Cranberry Raspberry Cheesecake Trifle, here.

Trifles are of English origin and are usually comprised of cake (often pound cake but other cakes can be used), which is often sprinkled with alcohol, such as sherry, brandy or liqueur, interspersed with layers of pastry cream, whipped cream, jam or jelly and occasionally fresh fruit in a footed glass dish.

The final dessert becomes more than a sum of its parts. Once assembled all of the ingredients begin to meld together in flavor and texture. The result is at once light and rich (you know how some desserts can be, like chocolate mousse) and a little goes a long way. This is certainly true of our Low FODMAP Cranberry Raspberry Cheesecake Trifle.

You do need a clear glass dish with straight(ish) sides to assemble and show off the ingredients to their best advantage. Most trifle dishes have volume between about 10-cups (2.4 L) and 14-cups (3.3 L). The one pictured holds 14-cups (3.3 L). 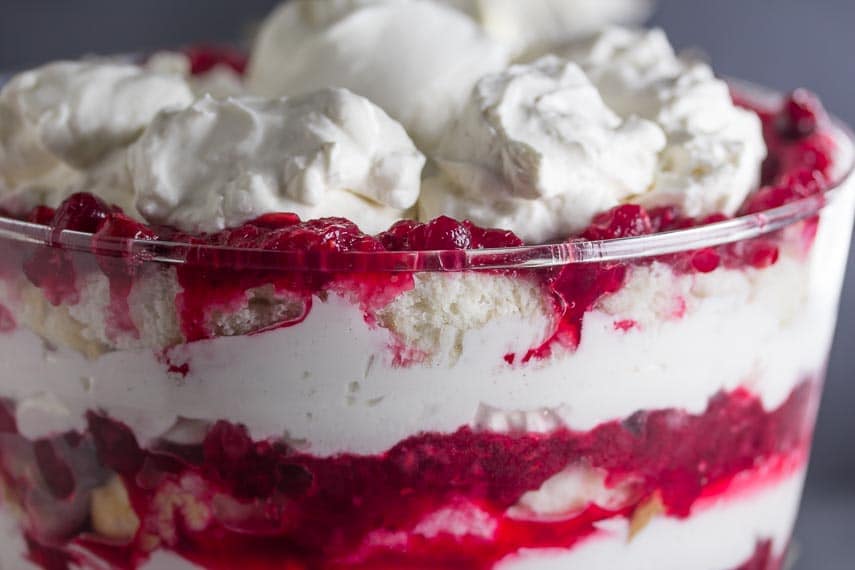 Hopefully by now you now that the low FODMAP diet is not a dairy-free diet. It is lower in lactose. Heavy cream is somewhat low in lactose and does have a low FODMAP serving size of ½ cup (120 ml), but if you can find lactose-free heavy cream, we recommend it.

We also have an article that shows you how to make your own lactose-free dairy, in case you cannot find it in your market: DIY Lactose-Free Dairy.

This recipe began with visual inspiration from a recipe on SeriousEats.

For another show stopping dessert, check out our low FODMAP Baked Alaska! 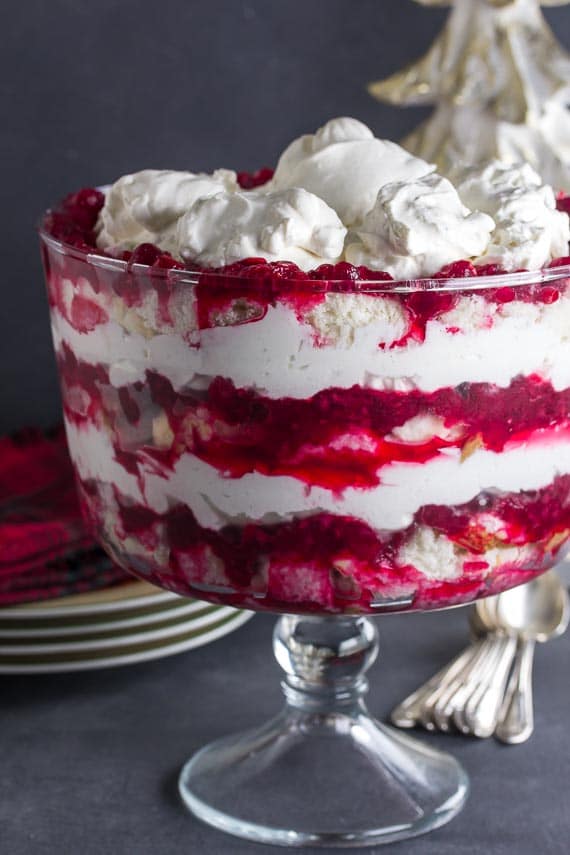 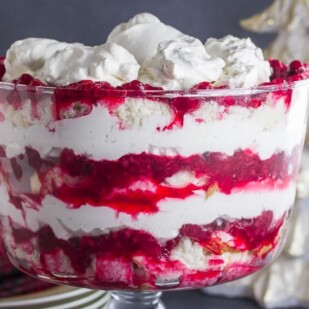 This Low FODMAP Cranberry Raspberry Cheesecake Trifle is a spectacular holiday or party dish with many do-ahead components. 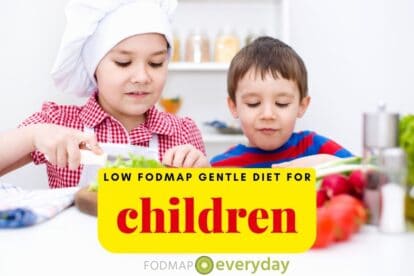 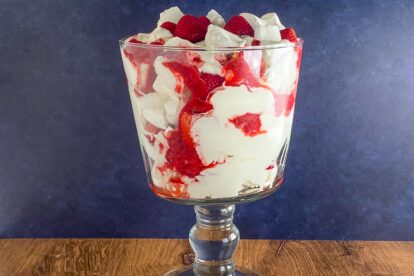 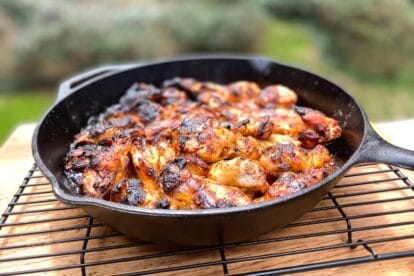 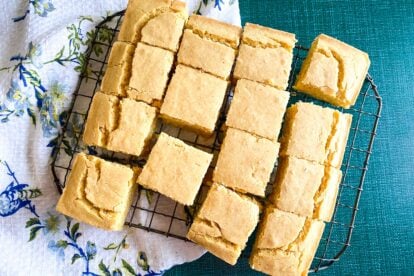