Cocoa Can Be Low FODMAP – It’s About Portions

Monash University says that Cocoa (or cacao powder, as they call it) is Green Light/Low FODMAP in small quantities (about 1 U.S. tablespoon/8 g), but that is not the whole story (see below – you can actually have more!)

All of this means that we can eat all kinds of delicious favorites – from cookies, to brownies, waffles, hot cocoa and layer cakes. You will learn All About Cocoa in this article!

First of all, finding cocoa in the Monash app can be difficult. It is not listed alongside chocolate (in the Confectionery & Sugars category). You will find Cocoa listed within the Beverages section.

Cocoa or Cacao Powder – You CAN Have It!

Cocoa powder, or cacao powder (they are the same thing) is made from crushing cacao nibs, which are the center of the cocoa bean, into a cacao mass. Cacao nibs contain a large proportion of fat, which happens to be cocoa butter. Cocoa powder is made by separating cocoa butter from the rest of the cacao mass. Not all of the fat is removed; cocoa powder fat content will typically range from 10% to about 24%.

Monash says that cacoa powder (their terminology) is low FODMAP in amounts of 2 heaped teaspoons equal to 8 g. Note that Cacao Powder is found under Beverages in the Monash app.

Fine print under the cacao powder entry tells us that “larger servings 200 g/ 7 ounces are high in Oligos (fructans and GOS); intake should be limited”. 200 g is 25 times larger than the 8 grams suggested as a low FODMAP amount. There appears to be a fair amount of wiggle room in terms of what we might be able to tolerate.

Any FODMAP Everyday® recipe that calls for cocoa will specify which kind we want you to use, usually natural cocoa or Dutch-processed. There is also black cocoa, which we sometimes use, and you might not have heard of it before – but we bet it looks familiar! It is the color of and has the flavor of Oreo cookies! It is featured in our Dark Chocolate Waffles – which, by the way make THE BEST ice cream sandwiches!

Use What is Recommended

Each type of cocoa has its own flavor profile and will react differently in most baked items. In other words, if a cake recipe lists natural cocoa and you use Dutch-Processed – and the cake doesn’t come out well – it isn’t because you can’t bake or that the recipe didn’t work, it is because you substituted one cocoa for another.

Please don’t do this! Recipes, especially baking recipes, are developed very specifically for the ingredients to interact well with one another. In the recipe development business we have what we call “tolerance”. Some recipes have great tolerance, meaning that you can fidget with them and they will still be fine.

Others, not so much.

Since you are investing your time and money in high quality ingredients, we recommend that you always follow the specific directions.

Here is a quick look at cocoas compared, as it is important to understand the difference. 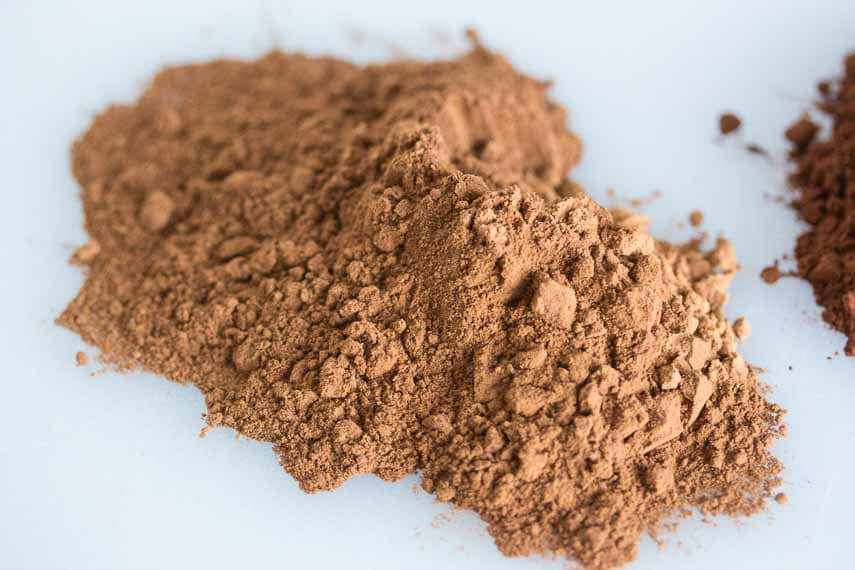 Natural Cocoa: Seen in the top image on the far left, and immediately above, this cocoa will usually be the lightest in color. Looking at labels, natural cocoa might also be called “cocoa powder” or “unsweetened cocoa.” Devil’s food cakes were often made with natural cocoa and in fact they were called “Devil” because of their faintly reddish color. The color is a reaction of the natural cocoa with the baking soda in the recipe.

Natural cocoa has a pH level between 5 and 6, which means that it is a bit acidic. This acidity is tempered in baking recipes by the inclusion of baking soda, with which the cocoa reacts (producing carbon dioxide). Some commonly U.S. brands of natural cocoa are Hershey’s, Scharffen Berger and Ghirardelli. 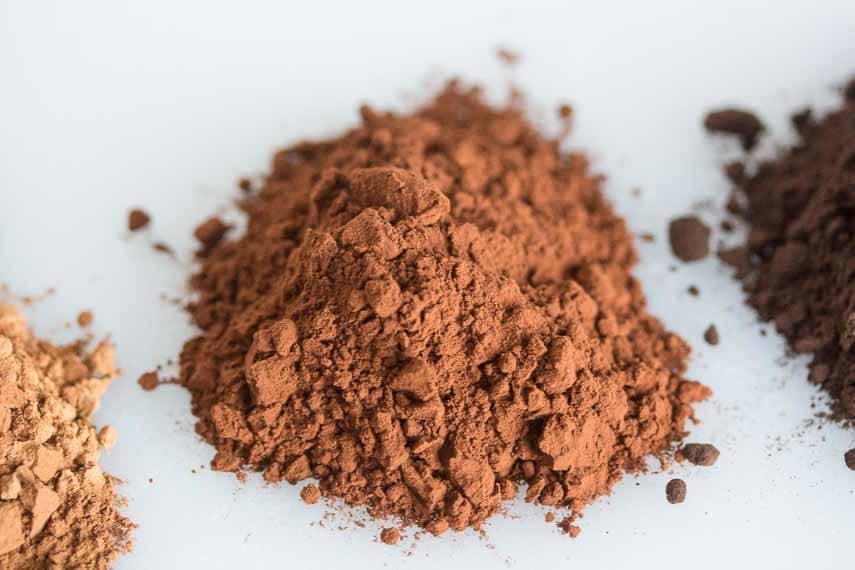 Dutch-processed Cocoa: This product (seen in the center of the top image and immediately above) is cocoa that has been processed with an alkalai (usually a potassium carbonate solution) to produce a cocoa that is less acidic. It is occasionally referred to as “Dutched”, “alkalized” or even “European style”.

The color is darker than natural cocoa and the flavor is mellowed and considered smoother, while richer at the same time. The pH is around a 7. Since Dutch-processed cocoa is not as acidic as natural cocoa, recipes calling for Dutch-processed are usually leavened by baking powder. 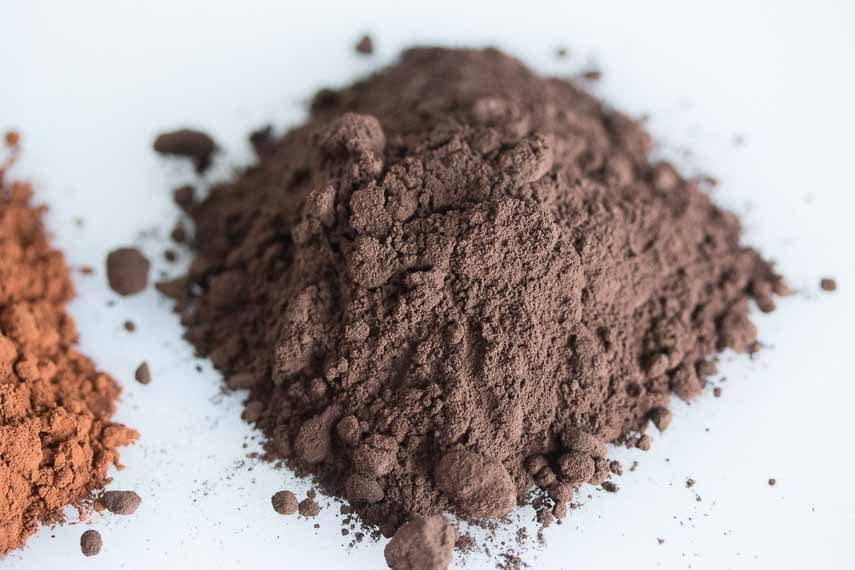 Black Cocoa: This cocoa is very dark, almost black in color and has a pH of 8. (It is on the far right in the top image and seen immediately above ). It has a very intense flavor and a somewhat sandier texture than natural or Dutched cocoa.

If you have eaten Oreo cookies, then you will recognize the color and flavor of this specialty cocoa. It is often used alongside Dutch-processed in a recipe, but occasionally it will stand on its own, as in our Dark Chocolate Waffles.

How Do I Know Which Cocoa To Use?

As stated before, hopefully the recipe you are using gives you clear ingredient recommendations. If it does not, and simply states “cocoa” or “unsweetened cocoa powder” then you have a bit of sleuthing to do.

Consider the context. If you are reading an older cookbook, say an American cookbook from the 1950s – like an early version of Joy of Cooking or Fannie Farmer, then chances are they want you to use natural cocoa. This is because that is what was available and widely used at that time. If you are cooking out of a mainstream magazine (not a cooking magazine) and a recipe lists “cocoa”, natural will probably be your best bet.

You can also look at the rest of the recipe. If it calls for baking soda only, use natural cocoa. If it lists baking powder only, then use Dutch-processed. Note that sometimes when Dutch-processed cocoa is combined with baking soda that a soapy flavor can develop. If the recipe lists both leaveners then all bets are off, as we cannot tell for sure.

But on the other hand, either might work. Truth be told, we have at times had as much success with one as with the other. It all depends on the specific recipe, however, always use what is recommended if it is specified.

If the recipe is not a baking recipe and is something like pudding, custard, hot fudge sauce, hot cocoa or similar, and no leaveners are present, then you have choices.

Now let’s get back to the 8 gram amount. I know it sounds like a small amount, but let’s look at our Chocolate Cupcakes, which happen to contain 1/3 cup (29 g) of Dutch-processed cocoa. But what’s important is that the yield is 12 cupcakes.

And even with some dark chocolate in the batter as well, they are low enough in FODMAPs according to Monash University. So don’t fear! You can have your cocoa and stay low FODMAP too!

For a fantastic recipe check out our Hot Cocoa.

And, since we assume you are chocolate fanatics, check out our articles, All About Dark Chocolate,All About Milk Chocolate and All About White Chocolate.

Rest assured that you will not find more trustworthy or delicious low FODMAP recipes anywhere – several hundred and counting. Have questions about a recipe, or did you make a recipe? We’d love to see it!

2 comments for “All About Cocoa” 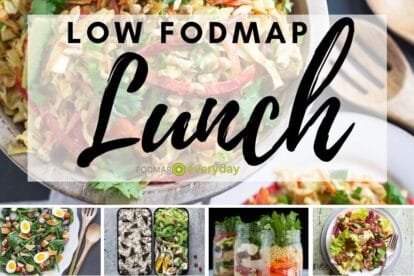 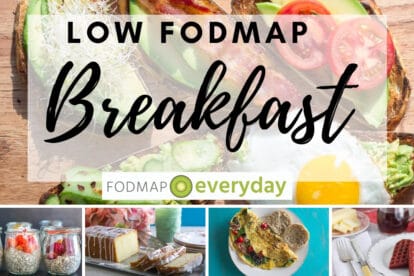 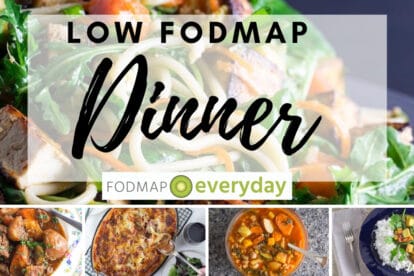 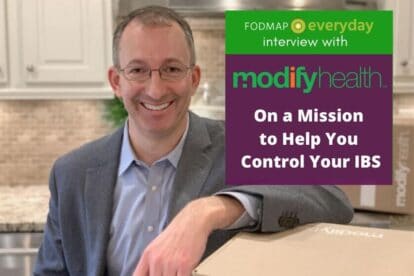 ModifyHealth: On a Mission to Help You Control Your IBS 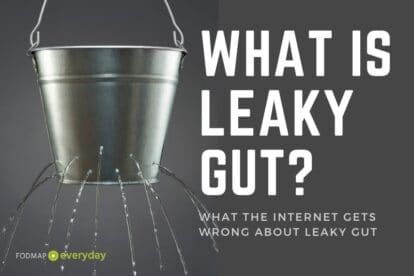 What Is Leaky Gut Syndrome?

The Keto Diet and IBS: A Closer Look