All About Pumpkin, Canned & Fresh

Pumpkin. People are pumpkin crazy around here. It might have begun with PSL (Pumpkin Spiced Lattes at Starbucks) but the flavor profile “pumpkin spice” and using pumpkin in cooking and baking has been around for a long time. Pumpkin pie is expected on the Thanksgiving table and pumpkin muffins and quick breads are commonplace. 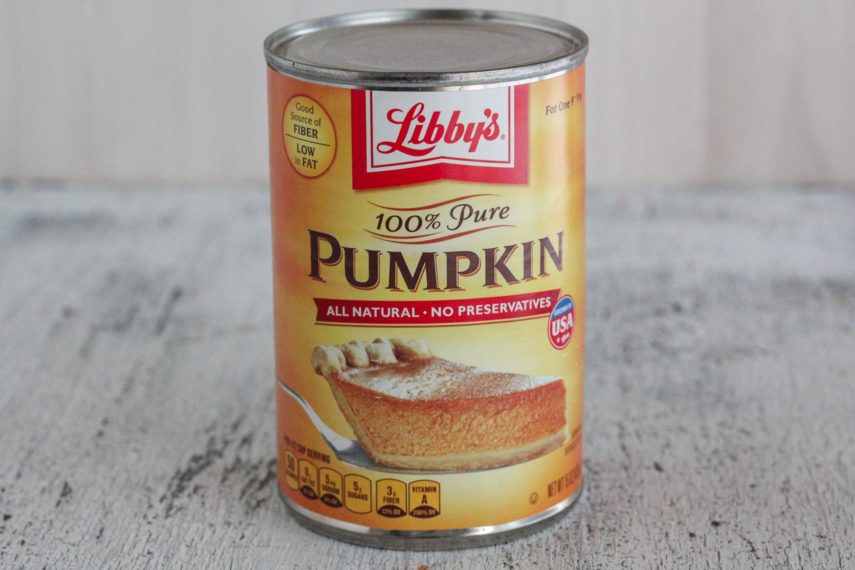 You will note that I did not start this Explore an Ingredient entry with a Latin name for pumpkin and there is a good reason for that.

Most cooks used canned pumpkin when they are using pumpkin in their recipes. Libby’s, as shown below, is the product of choice for recipe developers in the U.S.

What this means is that when you come across an American recipe in a magazine, book or online for a pumpkin dish, like the aforementioned muffins, quick breads, pies, etc., the ingredient listing is usually for canned pumpkin, not fresh. And since we are interested in the foods we actually cook with, this Explore an Ingredient entry is about canned pumpkin.

But first, you might have noticed that there are two pumpkin-like ingredients on the Monash app: something called Japanese pumpkin and something they call Butternut pumpkin, and then there is canned pumpkin. Since we typically cook and bake with the canned version, that’s what we need to know about! Stick with me here.

Japanese pumpkin is Australia’s term for kabocha squash. Their Butternut pumpkin is our butternut squash. Confused? You are not alone. To make matters worse, that canned pumpkin you are buying in America is very often a type of squash!

This is because pumpkin is a squash, so the USDA isn’t lying, but they are making it hard for us to understand our “pumpkin” intake in terms of FODMAPs. I sort of get it. If the label said “squash”, it just wouldn’t be as appealing!

As for canned pumpkin, Monash lists it as Green Light at ⅓ cup (75 g). We spoke with Monash and they reported that they did test American canned pumpkin and that they took averages from 4 different brands to calculate FODMAPs. 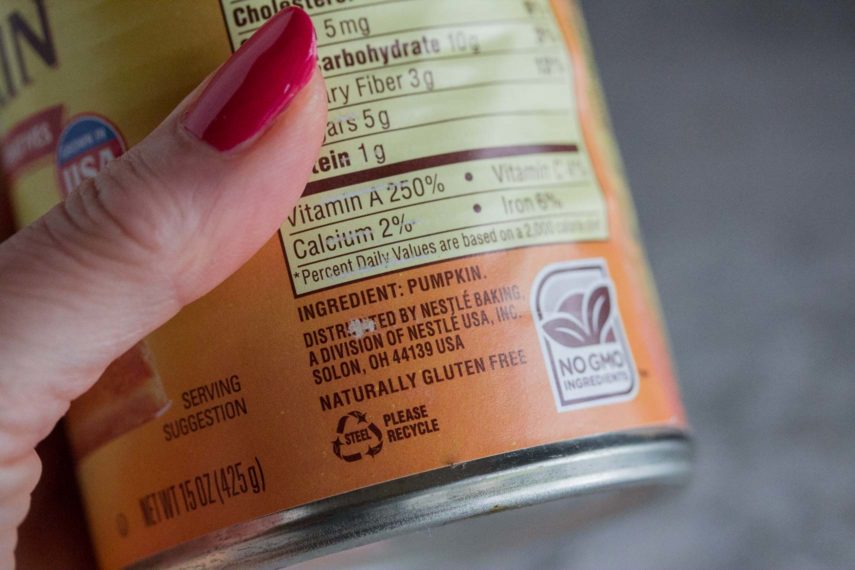 As mentioned before, Libby’s pure canned pumpkin is what most recipe developers in the U.S. use, so when you come across a recipe using canned pumpkin we recommend that you use it, too. It has a fantastic, rich orange color, is ultra smooth and creamy and nothing is in that can other than pumpkin. Talk about a clean label!

In fact, all those pumpkin pies you have been eating all your life have most likely been made from the recipe on the label or a derivation thereof. In fact, the recipe has been on the label continuously since the 1950s. People love it! Look how thick it is in the image below! 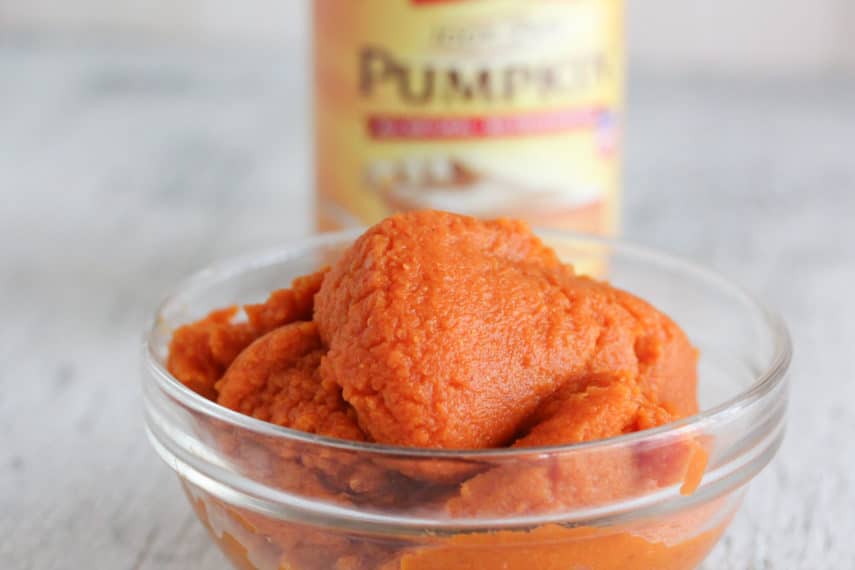 While Libby’s states “pumpkin” on the ingredient label, the company is very open about the fact that what they actually use is a vegetable called a Dickinson squash. While Libby’s doesn’t freely share their production amount, it has been estimated that they do grow several thousands of acres of this one type of squash and that the harvest is in the range of 60,000 to 100,000 tons per year, or 120 to 200 million pounds per year.

That’s about 100,000 squash processed a day. They have said that 90 million pies are made from their product every year. As we said, we love our pumpkin, so we felt it was worth trying to figure out the FODMAPs as closely as we could without the actual product being tested for FODMAPS.

Want to Cook Your Own? Get Ready for Some Math

First of all, why? OK, we know that some of you like “cooking from scratch”, but I have to tell you that from years of experience, that unless a recipe calls for freshly cooked pumpkin or squash, then the final results of the recipe will not be as intended. But if you insist, and want to cook pumpkin or squash and mash it up, here is some math…

Here’s the lowdown: Monash tells us that 2/3 cup diced (75g) of Japanese pumpkin has NO DETECTABLE FODMAPs but that only ⅓ cup (46 g) of butternut is recommended as low FODMAP. These amounts are for diced, raw. When we buy and use canned pumpkin, it is already cooked and mashed.

When cooked and mashed the amount of vegetable per volume will decrease, so we needed to head into the Test Kitchen to do some cooking and get our math brain going.

We know from research that Butternut squash (Cucurbita moschata) is the same thing as what Australia and New Zealand call butternut pumpkin. It is more closely related to what is used in the cans of “pumpkin” than the Japanese pumpkin/kabocha, so we honed in on the Monash allowed amounts of ⅓ cup (46 g) raw diced Butternut. How would this convert to cooked mash?

We went into the Test Kitchen and took 1 cup (138 g) of raw, diced butternut squash and simmered it with ½ cup (120 ml) water until soft, then mashed it. That entire cupful of squash, including the water, ended up as about 6 tablespoons (80g) mashed.

My goal was to approximate a mash that was as similar in moisture content and smoothness to the canned product that we all actually use.

How did we end up with ⅓ cup/80g of a final puréed product when we started with 138g of squash and added water? First of all, volume wise, the raw diced squash that makes up that 1 cup measures that way because there is a lot of air space.

The raw vegetable also contains a fair amount of water. Even though we added water to the raw squash, during cooking there is a lot of evaporation of the water added as well as from the water in the squash itself.

And then of course the squash cooks down in volume, meaning that the whole shebang might concentrate FODMAPs as well.

Remember how we started with 3 times (1 cup/138 g) the Monash app low FODMAP recommended amount for butternut squash? That meant that we needed to divvy our final amount by 3 as well. This means, by our estimation, that we can eat about 2 tablespoons of the mash (one-third of the resulting 6 tablespoons).

Remember, this has not been formally tested, but we went through the actions to give you a good idea – IF you want to cook your own.

You CAN Eat a Muffin! Enjoy Your Pumpkin

But, we strongly recommend that you use canned pumpkin, preferably Libby’s, for your baking and cooking. After all, Monash says we can have ⅓ cup (75 g) of canned pumpkin! (Which is a lot better than what we came up with for cooking it from scratch!)

Take a look: For instance, our recipe for Pumpkin Muffins with Raisins uses a total of 425 g of canned pumpkin, but the recipe yield is high and gives us 18 muffins. This ends up being slightly less than 24 g per serving. If you stick with 1 muffin per serving, you are very much in an allowable ballpark range (remember the Green Light amount says you can have ⅓ cup or 75 g of canned purée).

Of course, you will be the final arbiter if whether this ingredient works for you or not.

Not All Canned Pumpkin is Created Equal

If you are following a recipe calling for canned pumpkin my recommendation is to use it. If you happen to find a recipe that calls for fresh cooked pumpkin, do that. Our recipes use canned and I am very fond of Libby’s, as I have said.

It is a very consistent product and in addition to flavor and texture it has a brilliant orange color. One day I was lazy and picked up a can of some organic canned pumpkin at Whole Foods, since I was right there, and it was the most insipid color and my baked goods were pale and unappealing as well. It also had a higher water content and was gloppy (that’s a word, right?).

You would think moisture would always be a good thing in baking, but anytime you use something other than what the recipe developer has used, you are headed for disappointment. Know that most of us use a product like the Libby’s so if a recipe just says “canned pumpkin”, use that!

By the way, “pumpkin pie filling” is not the same thing. It is spiced and sweetened and cannot be used as a substitute. Look at the label for that one ingredient – pumpkin!

Note that Libby’s comes out to 81 g per ⅓ cup, whereas Monash has listed canned pumpkin at 75 g per ⅓ cup. This is a perfect example of why you need to view this diet broadly or you will drive yourself nuts. In the end we suggest that you arm yourself with precise and accurate information, and then relax and do your best with the diet.

Your body will ultimately tell you what you can tolerate.

We love pumpkin as much as you do. Check out our Pumpkin Cornbread, Pumpkin Cheesecake, Maple Pumpkin Pie, Pumpkin Granola, Pumpkin Spiced Latte Mocha Blondies and Spicy Smoky Pumpkin Soup. 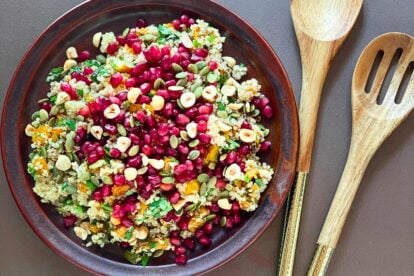 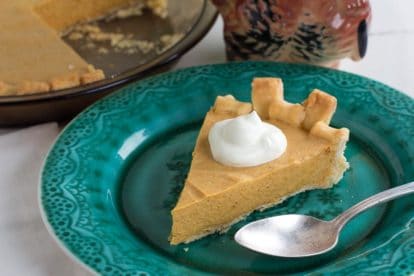 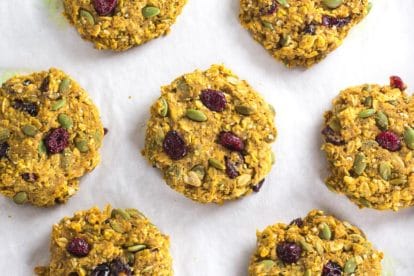 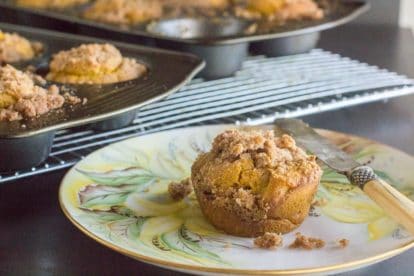 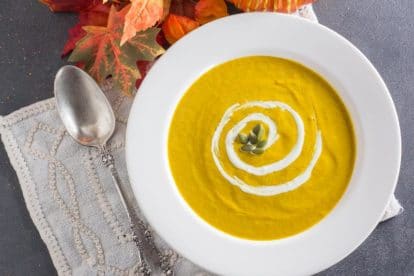 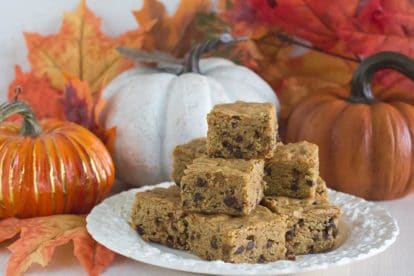 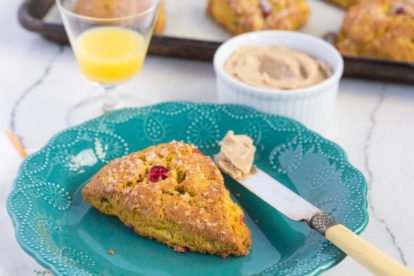 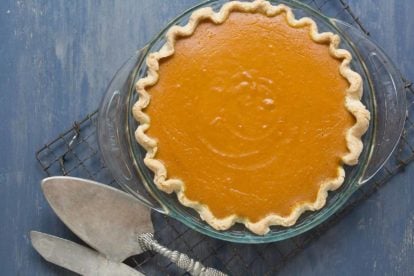 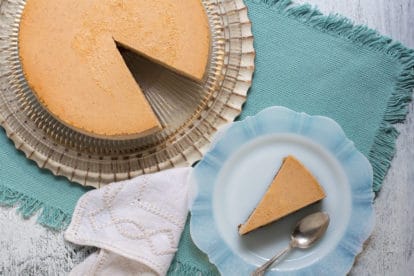 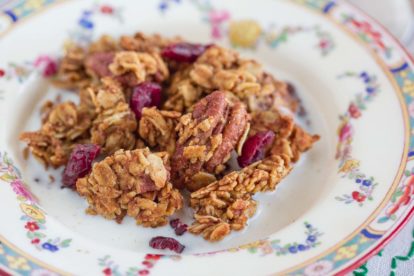 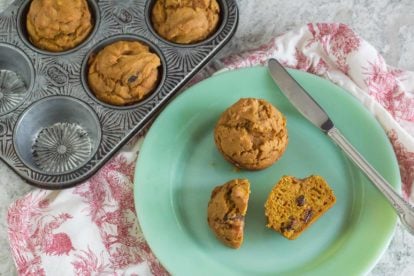 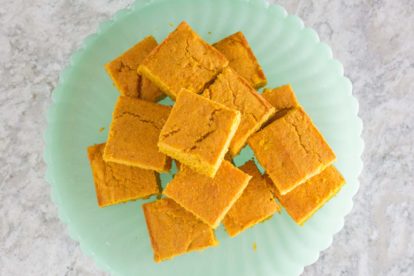